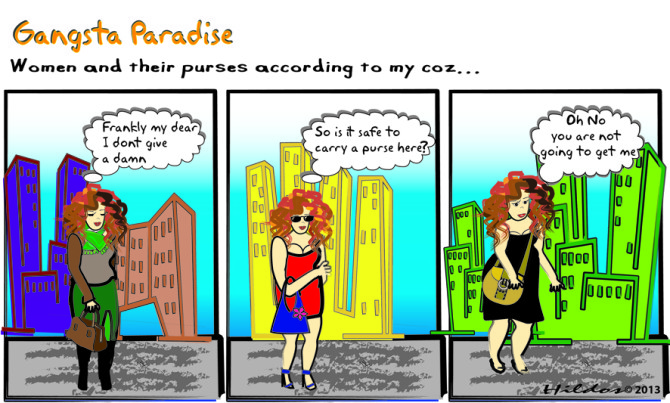 They say ‘The fear of burglars is not only the fear of being robbed, but also the fear of a sudden and unexpected clutch out of the darkness…’ other say ‘Any time three New Yorkers get into a cab without an argument, a bank has just been robbed’….hahaha

Hello people am back it s been while but Hildos preparing to go to the city is so F**King hectic!!

So, I am back today and I wanted to share something that happened to me a year ago, while I was shopping in Hamra. A new trend apparently has been infesting our country since a while now and it’s purse robberies. These incidents are occurring frequently and decreasing nowadays and apparently targeting women’s purses!! Even though these purses most of the times are thrown away and they are more expensive than what they will find in the wallets (just FYI for the robbers)

Anyway so a year ago while shopping in Hamra in a small boutique, two veiled women entered (and overweight just like I was then :)) and while being distracted by choosing a ring I felt like a knob and very innocently thought that because of lack of space these women pushed me to try to get in.

Well the funny thing happened moments later when I wanted to pay while reaching out for my wallet I discovered that it was missing… so I started looking in my big huge purse but my wallet has just vanished!…no no no… And there it goes the 5 stages of grief in a couple of hours…

The masking effect of denial was disappearing slowly and reality was emerging its bitter head…yes reality bites!! I was robbed!! And for those of who know me well they can guess that I started blabbering and as they say in French ‘Du n’importe Quoi!!’ and of course accompanied with large hand gestures. All that with a bewildered Anarzo with a what the hell look on her face while driving the car through the places we went to earlier and listening to the crap that was getting out of my mouth… In my anger and shock I blamed everyone… no one was spared!!

And there it was the if only moment!!
If only I paid attention
If only the zipper of my bag was in front and not I the back
If only I listened to my intuition and paid earlier
FYI people just few moments before the incident I wanted to get my wallet out of my purse but I did not!!
Well apparently this is the normal reaction because I was feeling helpless and vulnerable and wanted desperately to gain control of the situation and still escape from the painful reality of losing a wallet that I got from NYC and my ID which is so difficult to get back!!. So I started secretly making deals with my Higher Power… If I find my wallet I will do this and do that

Apparently the mourning started kicking in. So I started grieving (metaphorically) my loss and my first reaction was to deal with all the implications…. I called all the credit cards companies (yes credit cards with an S for those who know me well they can affirm and for those who don’t ask my bro he can give you details as he pays them 🙂 ).
All the customer support of these credit cards companies were very empathetic one of them just said OHHHHHHHH SHIIITTT (literally) …..
The funny adventure was going to the police… so we went to the first police station and apparently anger was contagious that day so both Anarzo and I started talking simultaneously to the policeman to explain the story but well we were more like shouting together at the same time… The policeman puzzled and not able to get what we were saying looked at us with again with a what the hell look…He invited us in but unfortunately we had to go another one because I live in a different district …As we entered the second one another policeman invited us in and we explained what happened and apparently 10 other robberies occurred that same day. He asked me to do a photocopy of one of the papers so Anarzo volunteered…

In all the chaos I opened my purse to get my wallet and give her money and this is when I realized its gone …there it is…I lost my wallet…it’s only a wallet… it could have been worse….
Well apparently this is my acceptance phase…and they say that in this phase you are usually calm and quiet… but it wasn’t for me why? well you see this was the day to celebrate Anarzo’s birthday and we were supposed to go out for dinner and instead this is what she got a day of chaos and adventure. Still we went for dinner she paid for it but we had such a long laugh trying to recall what happened!!

Coping with being robbed is very personal and hard experience and few can understand or help you … but allowing myself to feel the fear rather than resisting it… going through the emotions , daring to face it but most important reaching out to someone, helped me overcome it…. only then I started managing my feeling…and if you are lucky enough you will have a comforting and funny friend as Anarzo on your side to make it easier and as William Shakespeare says’ The robbed that smiles, steals something from the thief.…Food for a thought